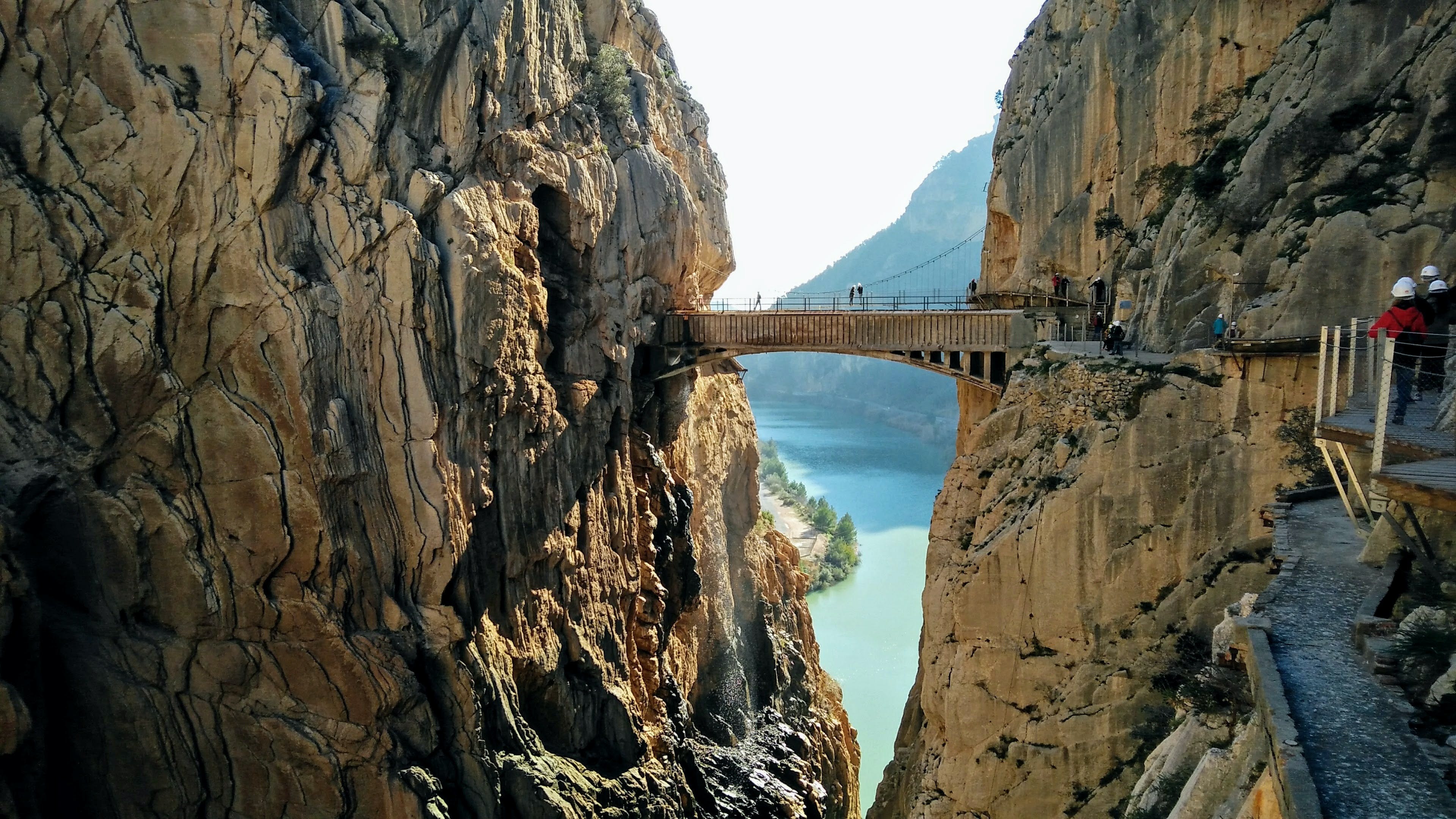 Discover the incredible Caminito del Rey with this tour departing from Málaga and enjoy the incredible views of one of the world’s best hiking pathsYou will first head to the reservoir of Conde del Guadalhorce, crossing the homonimous valley, a unique place in the province specialized in the production of citrus trees. From there you will cross the range of Alcaparain and some white villages, before arriving at the dam, where you will start the hike crossing a tunnel made under the rock until the entrance of the Caminito del Rey.During the hike you will discover the geology of the natural park, the mediterranean plants and animals, the landscape, the way of life of the inhabitants and their customs. You’ll stop at the most breathtaking view points from the canyon to admire the gorges and to take pictures. Once in the forest, enjoy a picnic with local products. At the end of the hike you will take the shuttle bus which will leave you at the start of the hike, from where you will come back to Málaga. 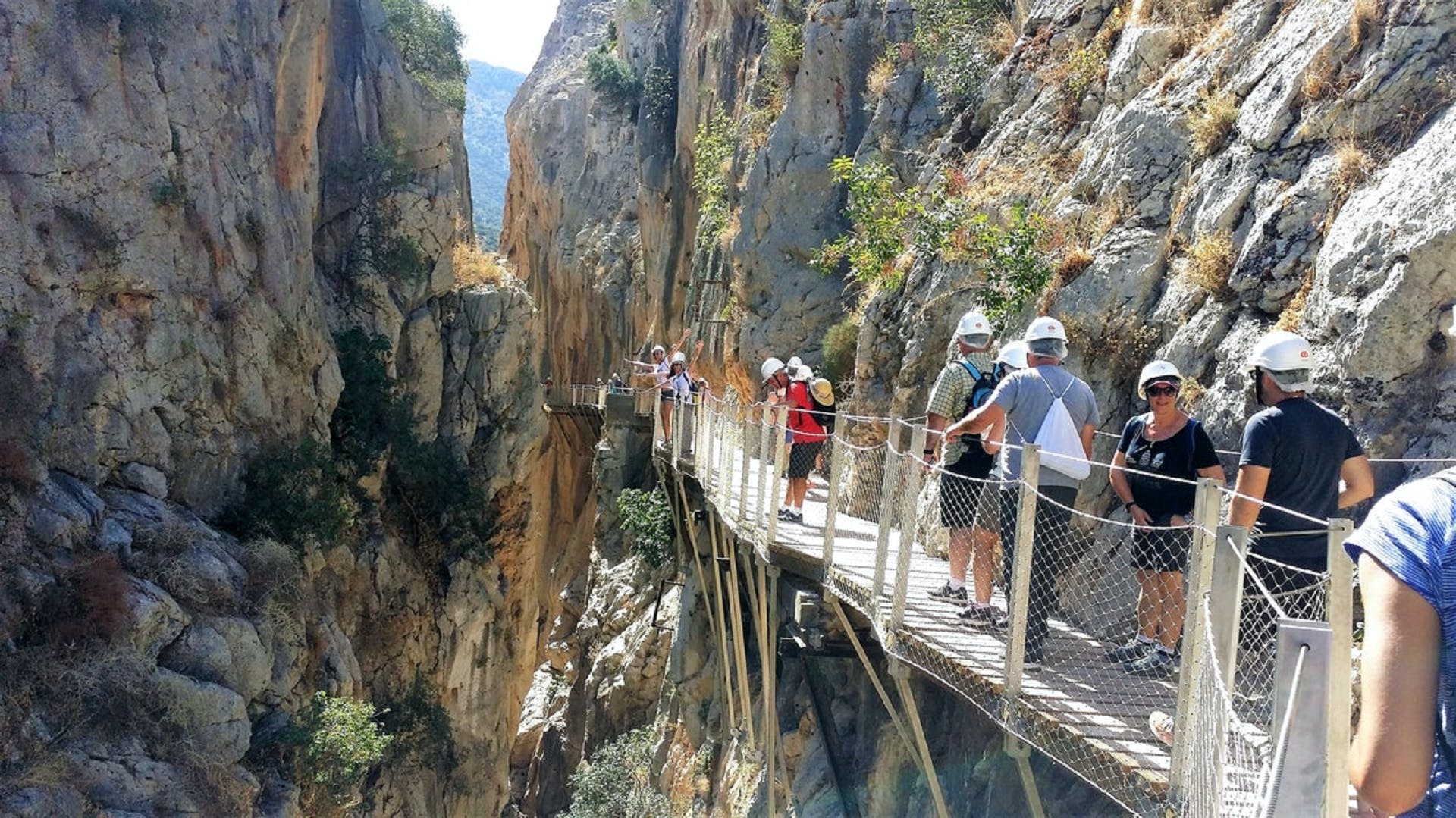 You will start hiking by “El Kiosko” restaurant located near the entrance of the Caminito del Rey at 10:30 a.m. After a while, the gate of Caminito del Rey will be reached. The guide will explain to you the relevance of this area in Spanish contemporary history due to different components: the electric powerhouse, the railway, the reservoir, etc. Later continue the walkway passing by “Gaitanejos” cliffs, the “Hoyo” valley, “Gaitanes” cliffs, Ribera bridge & finally by the hanging bridge. The tour guide will finish this tour before passing over the hanging bridge. After passing over the hanging bridge you will have to keep walking straight about 20 minutes until reaching the public bus stop to go back to the starting point. It takes with the bus about 30 minutes to go from the bus stop to Kiosko restaurant. 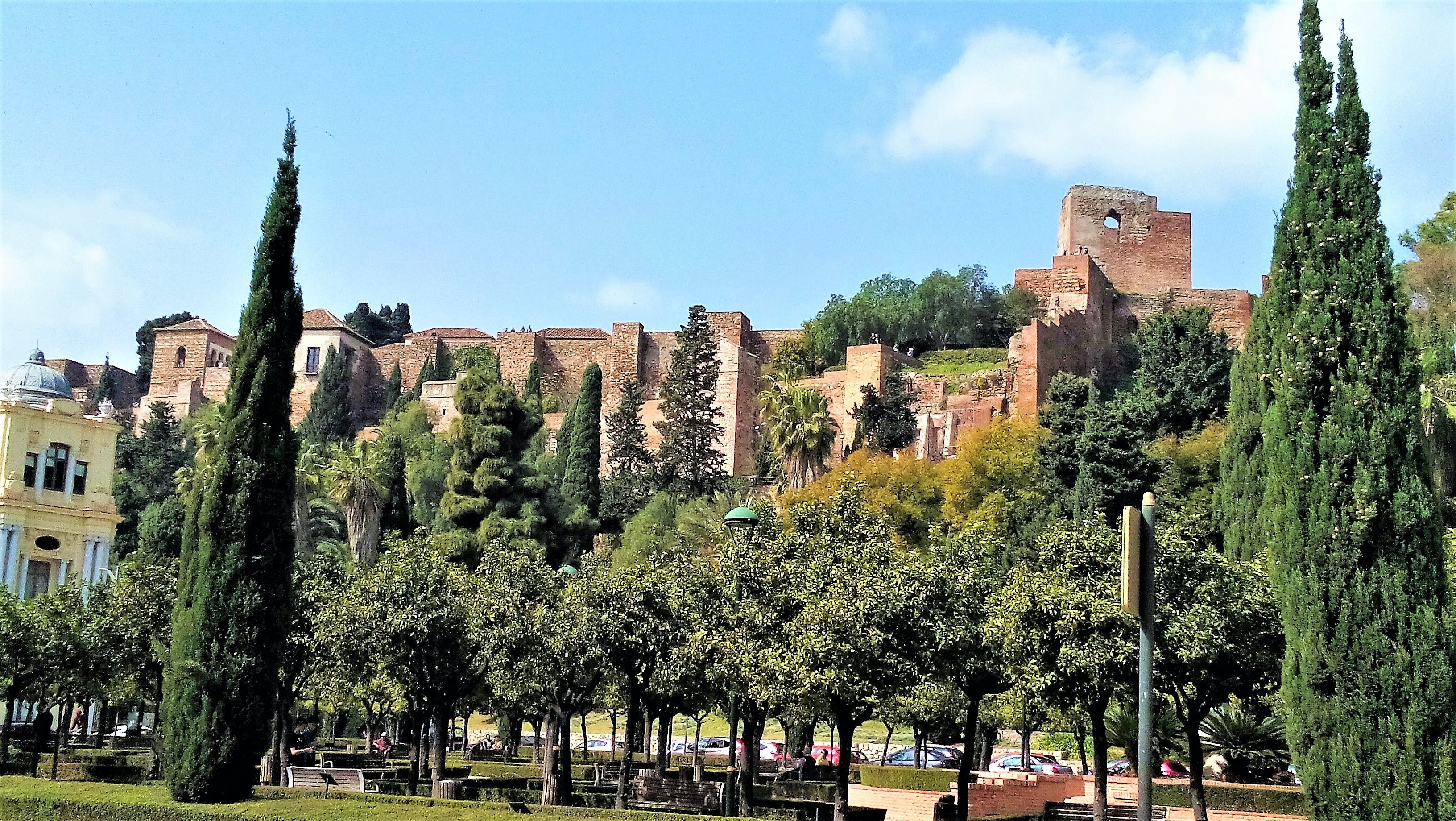 The first stop of this tour will be the archeological site: the Roman theater ordered to be built by the emperor Julius Cesar August, the Alcazaba with 2 Arab palaces inside and Gibralfaro castle. Even if you won’t climb Gibralfaro hill, you will see it and the guide will tell you about this castle from where it was possible to control and keep an eye on the whole city of Malaga.Then stroll along Alcazabilla Street, while listening to stories, legends and important facts about the town until you reach the birthplace of Pablo Ruiz Picasso. You will discover his playground, the church where he was baptized and Picasso’s museum that contains a part of his large artwork. Enjoy also the sights of the cathedral and learn about its construction and its main artistic heritage.For the last part of this tour, you’ll pass by Constitution Square and Larios Street, at the same time that your local guide explains to you everything about this commercial street and the importance of Marquis of Larios in the Malaga contemporary history. The tour will end back at the starting point. Enjoy the beauty of one of the world’s best hiking paths with this private tour of Caminito del Rey. Trek along the route’s hanging bridge, canyon, and cliffs while listening to insightful commentary from your guide. Ensure you don’t miss the highlights of the route by traveling with a guide who knows the ins and outs, including the Hoyo Valley and the Gaitanejos and Gaitanes Cliffs.You will meet your guide at the entrance of the parking area located by “Mirador” restaurant in Ardales. Discover this magnificent walkway while listening the history about this area from the hand of the guide and admire also its nature. Your tour will start passing by “Conde del Guadalhorce” lake, before reaching the access gate that let you get into the walkway. Once you are inside, there are 3 parts: “los Gaitanejos” cliffs, “Hoyo” Valley and “Gaitanes” cliffs. At the end, enjoy not only “Rivera” bridge, but also “Gaitanes” canyon and finish crossing the hanging bridge.
After crossing the hanging bridge, it’s still necessary to keep walking about 20 minutes in order to reah the bus station, where a bus will take you to the starting point. If you are looking for an amazing experience along with spectacular views, visit the breathtaking path of El Caminito del Rey (The King’s Little Pathway). From the meeting point in Malaga, you will take the route Ojen-Monda-Ardales.Once you have arrived at the Conde de Guadalhorce Dam, the main water reserve in the province of Málaga, your guide will explain you all about the history of the Natural Area of Desfiladero de los Gaitanes. The Gorge Desfiladero de los Gaitanes is a canyon, carved by the river Guadalhorce, placed in the center of the province. The northern access to it is via Guadalhorce reservoirs and the southern is via El Chorro. The construction of a water channel from the reservoirs in the North to El Chorro was carried out together with a path for maintaining the channel. This one is known as El Caminito del Rey because it was first opened by King Alfonso XIII. This path, about 3 kilometers long, has stretched of less than one meter wide and it is hanging about 100 meters high above the Guadalhorce river. It has just been refurbished, and it goes along vertical walls and a footbridge over the gorge on the same waterway. 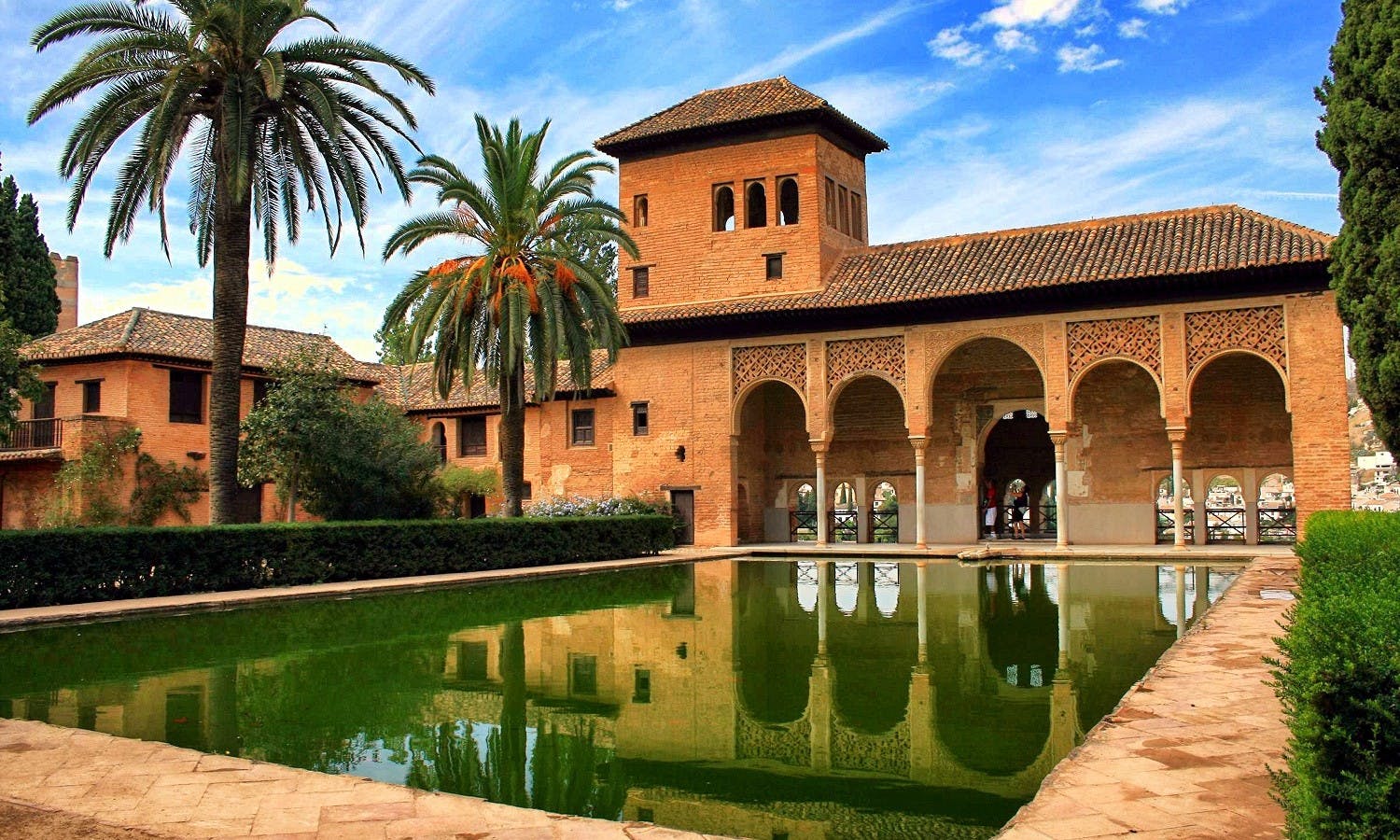 Discover the beautiful city of Granada, located in the foothills of the Sierra Nevada Mountains. A historical city where you will visit the Alhambra Palace, the Palace of Charles V and the Generalife Gardens.The Alhambra, a Moorish citadel and palace, was built in the 13th century. It is declared a World Heritage Site by UNESCO and is the most renowned building of the Andalusian Islamic historical legacy. It became palace, citadel and fortress, and was the residence of the Nasrid sultans and their senior officials, including servants of the court and elite soldiers during the 13th and 14th centuries.Charles V, Holy Roman Emperor, demolished part of the architectural complex to build the Palace which bears his name in the 16th century. The Generalife is a garden area attached to the Alhambra which became a place of recreation and rest for the Granada Muslim kings. The Generalife gardens are also declared a World Heritage Site by UNESCO.Down again in the city center, you will also have free time for lunch and to explore the center of the city by yourself: visit the surroundings of the Royal Chapel, the Alcaiceria, Corral del Carbon and much more.

Discover Málaga in all its beauty and admire its most famous and important landmarks. This guided tour of the city center will take you through the most beautiful streets of the city and make you fall in love with this incredible place.Visit amazing monuments such as the Cathedral of Málaga, the Alcazaba and the Roman Theater: thanks to the help of the tour guide you’ll get to know more about the history, the art and the life of the city.