Isola Bella was conceived in 1650 by Count Vitaliano VI Borromeo who decided to transform a rock outcropping from the lake into a place of delight. It took four centuries to complete this magnificent work that includes the Borromeo Palace and the spectacular gardens. The tour is divided between the palace and the Italian Baroque garden.The palaceA fascinating tour inside the princely residence through over 20 historic rooms including the Throne Room, the Salone Nuovo, the Music Room, the Napoleon Room, the Ballroom and the Tapestry Room. A rare example of a fully preserved Baroque collection in Northern Italy is the Gallery of Paintings or of General Berthier, which houses a collection of 130 works, among which are authors such as Boltraffio, Gianpietrino, Daniele Crespi. On the lower floor, almost at lake level, are the six caves covered with pebbles, tuff, stucco and marble originally built to amaze and give refreshment to the guests of the Palace.The gardensFamous in the world, the gardens of Isola Bella are an important example of an Italian Baroque garden with a perfect combination of art and nature. In the center stands the Teatro Massimo: a striking architectural construction consisting of ten terraces that form a plan adorned with fountains, obelisks and statues. It is possible to climb up to the top of the Theatre on a large terrace, which, with its 37 meters of height above the lake level, is the privileged place to enjoy the panorama of the Borromeo Gulf. Since 2002, the garden of Isola Bella is part of the prestigious English circuit of the Royal Horticultural Society. 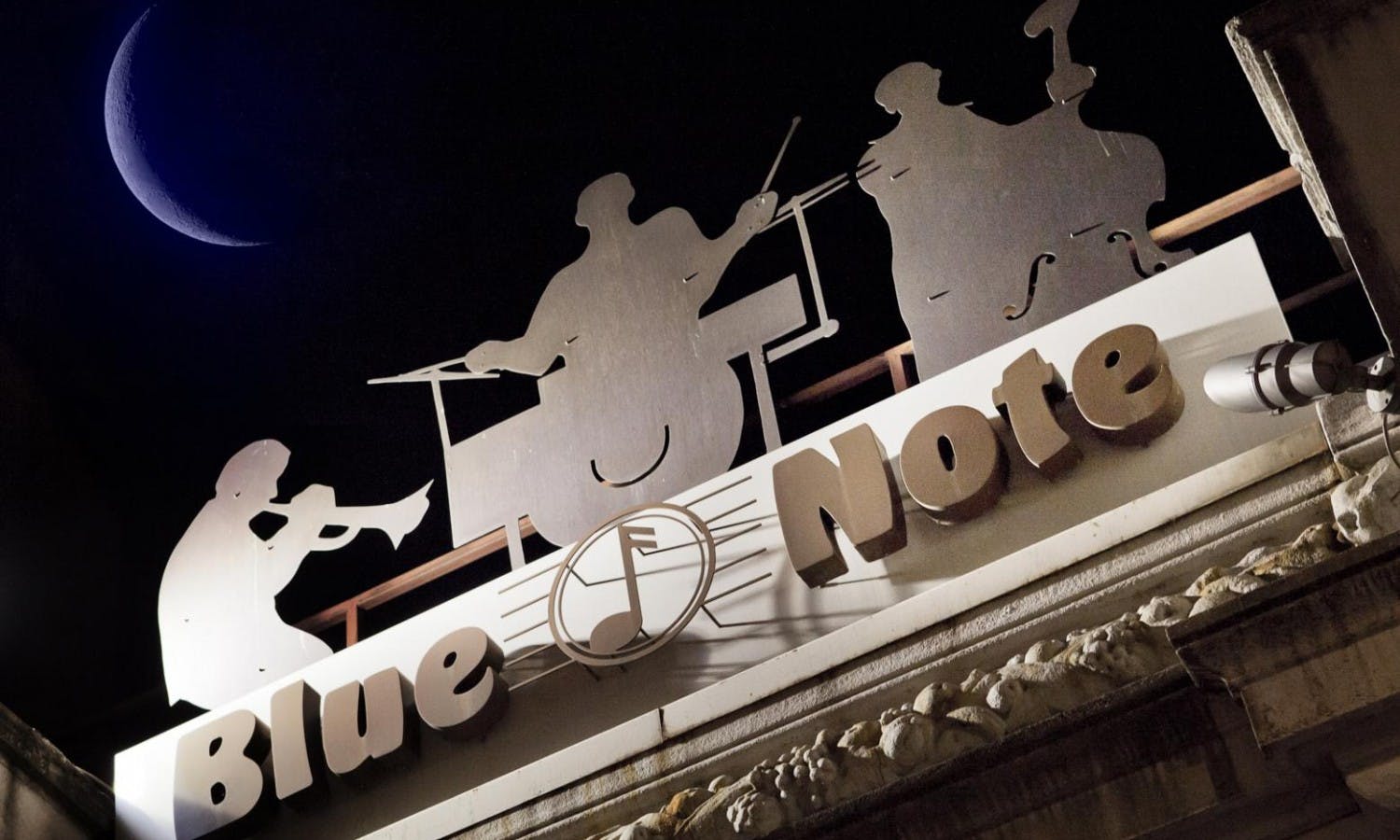 Opened in March 2003, Blue Note is the historic jazz club of Milan and is now regarded as one of the most famous and influent european live music venues. Blue Note is part of an international network that also includes the Blue Note Jazz Club of the New York Greenwich Village and the two Japanese Blue Note clubs in Tokyo and Nagoya.Artists like The Blues Brothers, Dee Dee Bridgewater, Billy Cobham and Chick Corea have already taken the stage at the Blue Note in Milan and the venue calendar is rich in events all year round.Choose between a Show & Dinner and a Show & Drink ticket (both tickets are valid for 12 months). Spend a beautiful night out listening to great, live music performed by Italian and international artists:
– The Show & Drink ticket includes admission to a live show and drink (choose between a soft drink, a beer, a glass of wine or a cocktail) that you can have either at the bar or at your table
– The Show & Dinner ticket includes admission to a live show and a 3-course dinner from à la carte menu. The restaurant offers Italian and international dishes and your dinner will be accompanied by the suggested wines

Sit down, prepare your camera and be ready to see all that surrounds you, decide how much time you would like to dedicate to each attraction choosing between a 1-hour option and a 2-hour option.You will see the famous shopping district “Quadrilatero della moda”, a concentration of luxury, boutiques and top of the range jewelry that have made this network of streets one of the most desirable and worldwide famous corners of the city. 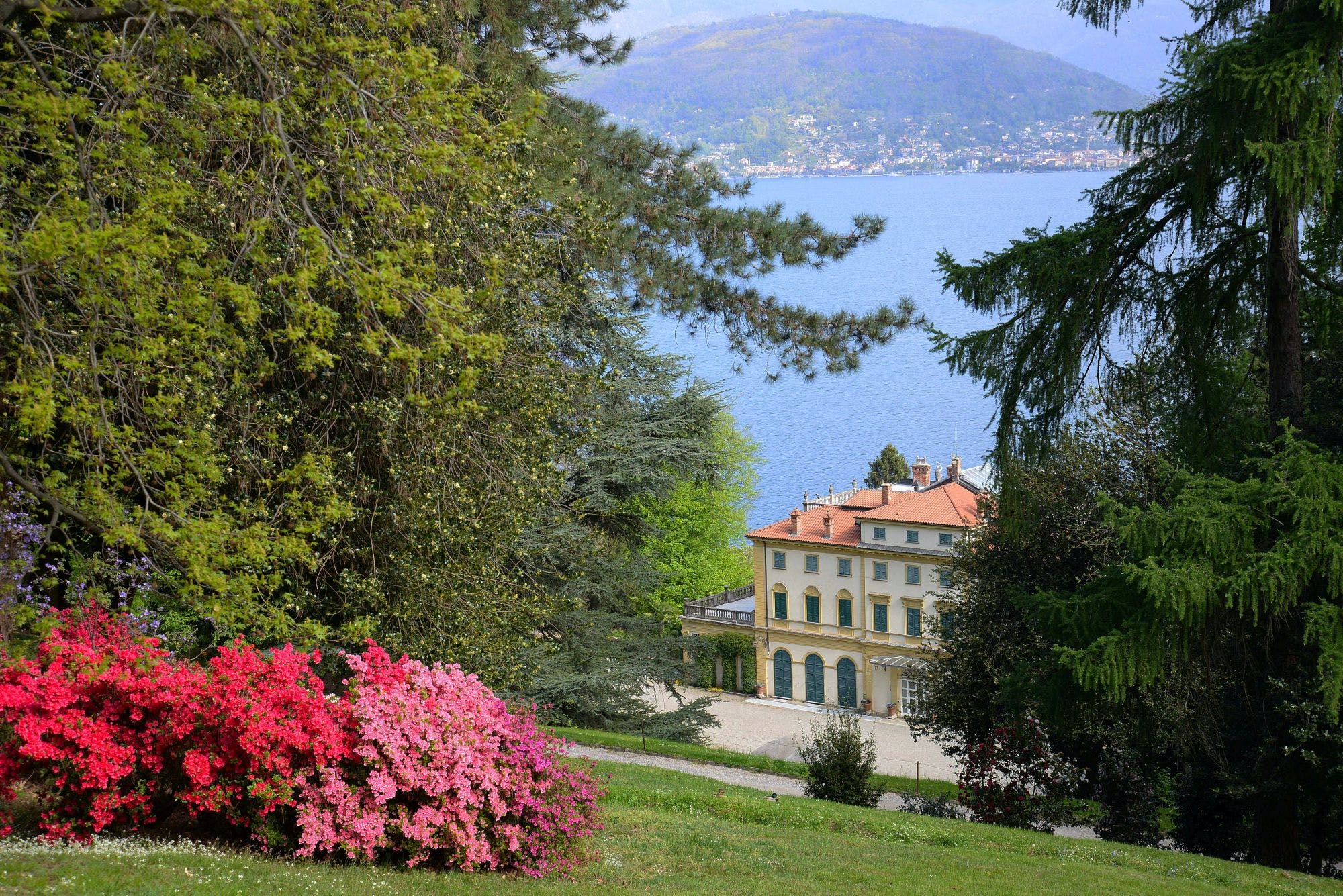 The Pallavicino Park extends for 18 hectares on the lakefront of Stresa among plants and flowered avenues. Great wonder of the park are the secular trees among which stand out the chestnut and the giant liriodendrons, among the oldest in Italy, as well as the magnificent cedar of Lebanon.The Garden of Flowers, with its colorful flower beds and rose garden, offers new blooms throughout the summer. The Park is famous for the over 50 species of animals that populate it, such as zebras, kangaroos, coati, the whooping crane and flamingos. In the space of the Farm you can meet up close deer, llamas, alpacas, sheep and goats.A playful moment for adults and children that helps them to get to know these animals better. 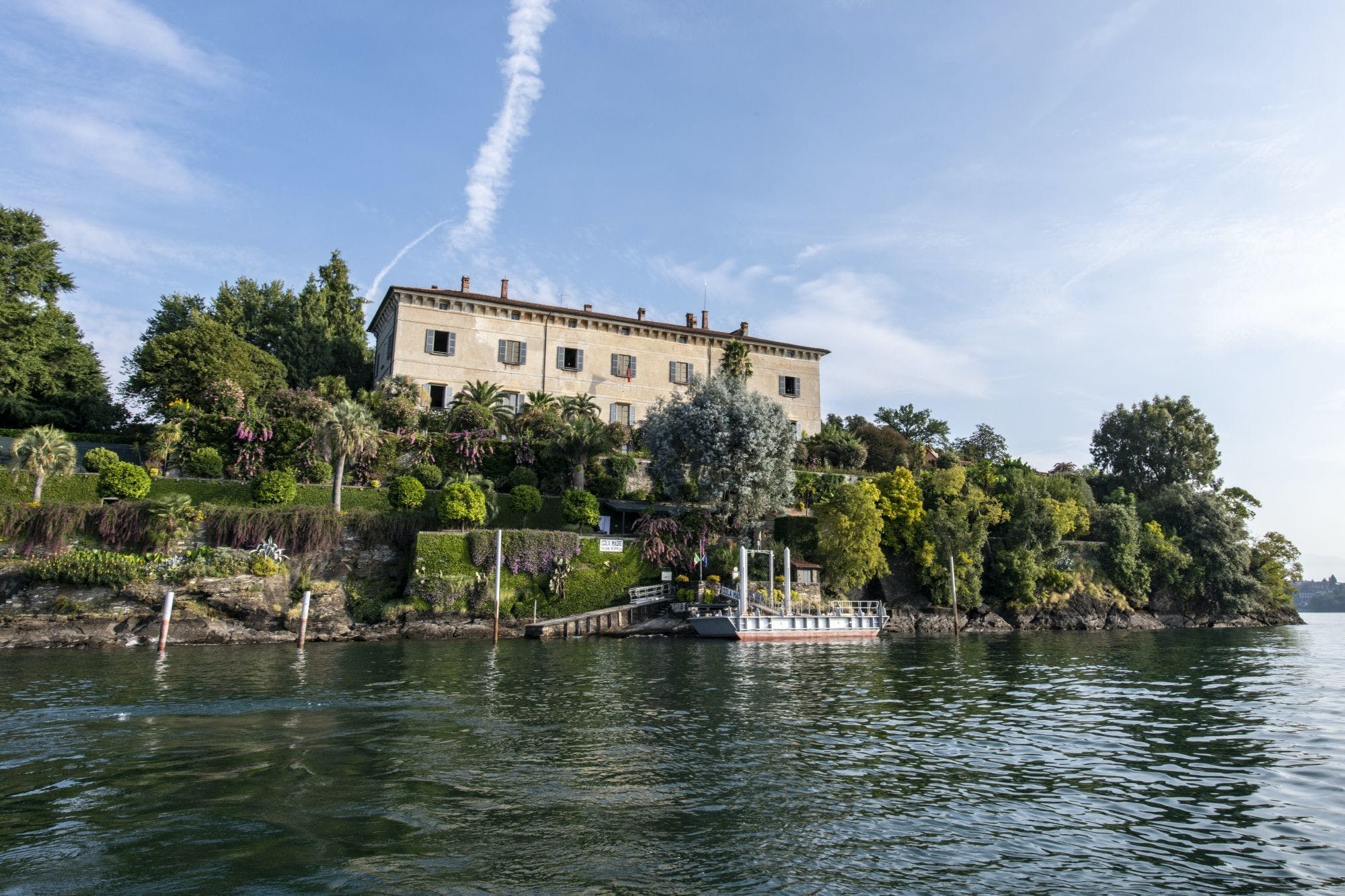 Isola Bella was conceived in 1650 by Count Vitaliano VI Borromeo who decided to transform a rock outcropping from the lake into a place of delight. It took four centuries to complete this magnificent work that includes the Borromeo Palace and the spectacular gardens. A fascinating itinerary inside the more than 20 rooms of the Borromeo Palace, passing through the Berthier Gallery which houses a collection of 130 paintings, up to the Hall of Tapestries where the gaze is lost admiring the golden weaves of these precious artifacts. Not to be missed are the caves, covered with pebbles, originally built to amaze and refresh the guests of the Palace. Impossible not to be amazed by the Italian Baroque garden where architecture, sculpture and nature come together in a perfect union. The protagonist is the Teatro Massimo with its imposing pyramidal structure composed of ten terraces adorned with statues, obelisks and fountains.Isola Madre with its 18 hectares is the largest of the Borromean Islands. At the end of the eighteenth century the island had taken on the appearance that it still retains today and began to be considered a place of peace and rest thanks to the mild climate and lush nature. From the nineteenth century the park was transformed: thanks to a particular microclimate, rare botanical species from all over the world found their habitat in this grandiose English garden. Animals with a colorful plumage and lush vegetation still make it the perfect destination for lovers of nature and hidden beauty. At the center of the garden stands the sixteenth-century Palazzo Borromeo, which today houses prestigious furnishings and a collection of puppets and puppet theaters made around 1830 by the famous set designer of the Teatro alla Scala in Milan, Alessandro Sanquirico.

Your tour will start at the center of the city with the famous Milan Duomo. This incredible cathedral is often described as one of the most beautiful churches in the world. In his book ‘Innocents Abroad’, Mark Twain dedicated a whole chapter to it, describing it as “so grand, so solemn, so vast! And yet so delicate, so airy, so graceful!” With skip-the-line tickets to the Duomo, you won’t waste time waiting in lines, you’ll go straight inside for a guided tour of this majestic space.Your next stop is the impressive Galleria Vittorio Emanuele II, a 19th-century glass vaulted shopping arcade. Brimming with fashionable shops and cafés, it’s often called the drawing room of Milan for its importance as a common meeting point. Passing through the Gallery, you’ll arrive at Piazza della Scala, the square which houses the world-renowned Scala Theatre – Milan’s Opera House since 1778 which is still in use today. Some of the greatest musicians and singers in history have performed here, notably Giuseppe Verdi whose famous operas, such as Falstaff, often premiered in this very theatre.Next, you’ll reach the Brera District. Rich in historical buildings, literature cafés, restaurants and fashionable bars, this area has long been home to artists and intellectuals. From here, winding picturesque streets will lead you north past Castello Sforzesco. An imposing medieval castle and fortress, Sforzesco was once seat and residence of the ruling family of Milan and now houses several of the city’s museums and art collections.You’ll end your tour with a bang at Milan’s most famous attraction – Leonardo Da Vinci’s ‘The Last Supper’. Hidden away at the Church of Santa Maria delle Grazie, this masterpiece attracts huge crowds leading to general access queues that often stretch for hours. With a pre-booked slot and skip-the-line access, you’ll get you straight inside, where you’ll spend 15 minutes alone with this masterpiece, your group of just 25 people or less, and your guide. And there you have it. In just three hours you’ll have seen all the highlights of Milan and become acquainted with the history and facts behind each attraction. Jumping the queue and avoiding long waiting times will really allow you to make the most of your time. Join this food tour, the perfect great way to spend an unusual day out in Milan, tasting some of the best Italian treats in the city and learning what the local culinary culture is all about. Some of the local food you’ll enjoy in the course of the experience is Italian coffee, cannonici, prosciutto, Italian cheese, Milan-style meatballs, lasagna, wine, Prosecco and much more.You’ll meet all the wonderful vendors who put their hearts into their specialties and you’ll learn what makes eating and drinking in Italy so wonderful. You’ll even get to try a special Milanese risotto and the unmissable gelato. You’ll learn how to spot the freshest gelato so you can take the insider knowledge of this Italian ice cream with you through the rest of your time in the city.Take part in this unforgettable Milanese food walking: discover the flavors of Milan and explore all the best the lesser-known local spots.

La Scala Theatre is recognised as one of the leading opera houses in the world. It also hosts a Museum that houses a rich collection of costumes and musical instruments as well as a gallery of portraits and busts dedicated to the great musicians of the history. As you tour the theater and museum, you’ll get to see just how much work goes into opera productions where some of the best singers in the world have performed for more than 200 years.A professional guide will lead you to discover the Museum rooms and will tell you facts and anecdotes about great artists such as Verdi and Toscanini, who performed on this important stage. Admire the galleries and the beautiful hall with a crystal chandelier, not to mention the stage itself. With a little luck, you might see the artists! Enter one of the most suggestive historical places in the heart of Milan, in a journey between past, present and future.Funded in 1953, it is today one of the largest technical-scientific museums in Europe. Immersed in the cloisters of an Olivetan monastery of the sixteenth century, it extends for about 50,000 square meters.Do not miss the New Galleries, the largest permanent exhibition in the world dedicated to Leonardo da Vinci. A scenic journey through 170 historical models, works of art, ancient volumes and installations to tell the figure and work of Leonardo, engineer, humanist and nature investigator.Excited in front of extraordinary objects such as steam trains, the catamaran AC72 Luna Rossa, the schooner brig Ebe, the command bridge of the transatlantic liner Conte Biancamano, the submarine Enrico Toti, the space launcher Vega and the only fragment of Luna exhibited in Italy.

Skip the line tickets to the National Museum of Science and Technology Leonardo da Vinci boeken? 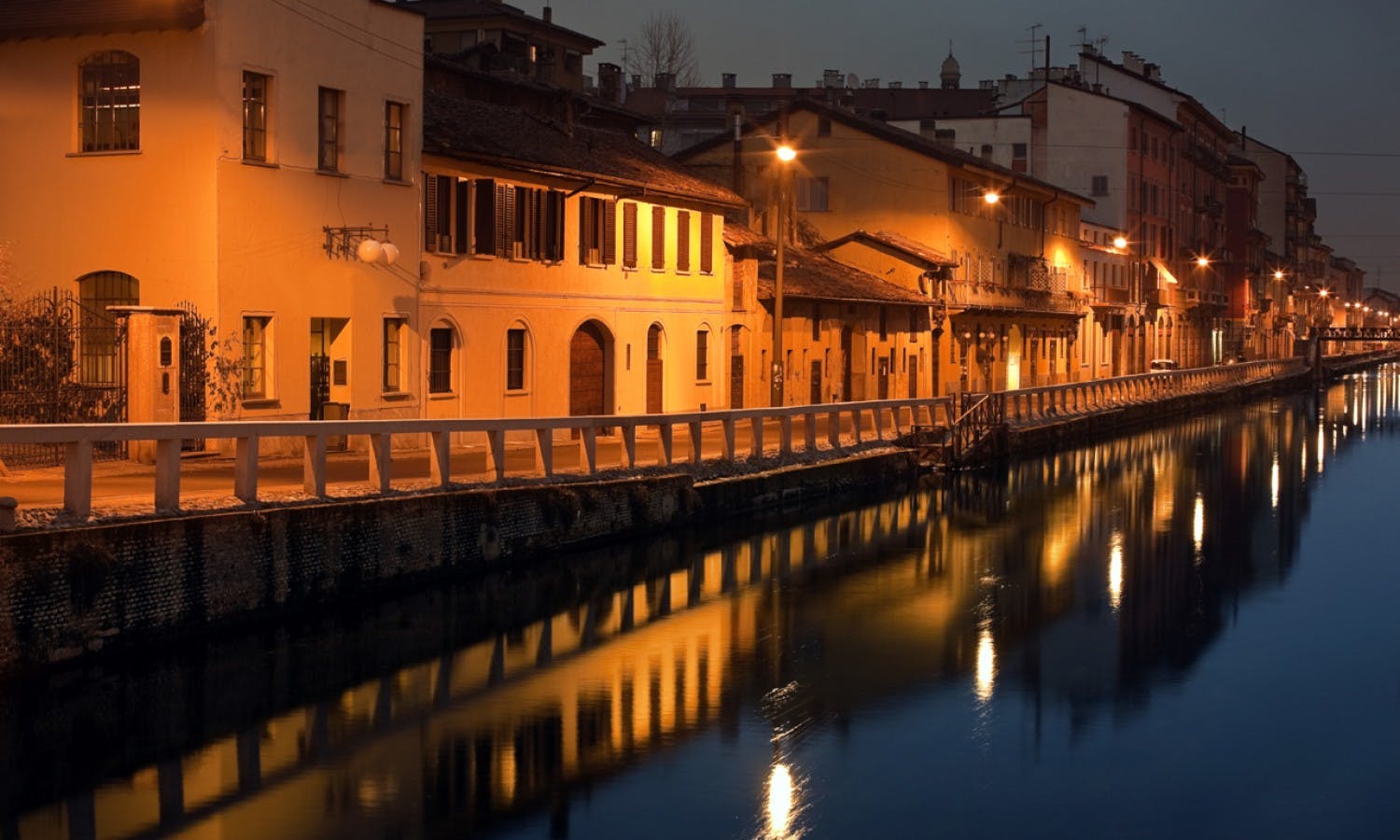 The Navigli canals are a magical place, where time seems to have stopped! Treat yourself to a guided stroll to discover one of the most fascinating stories of Milan and have fun in the most sparkling district of the city.This experience is part of STEP, a selection of walking tours designed as a way to discover a destination in more depth, finding hidden gems, meeting the locals and exploring off the beaten path.The tour will start from the Basilica of St. Eustorgio, a 4th-century Christian church, where you will visit the Ark of the Magi, a large sarcophagus which, according to the legend, houses the relics of the three Magi, and Portinari Chapel. While walking along the new dock towards the Naviglio Pavese and the Naviglio Grande, your guide will provide you with explanations and anecdotes of the canal network, the contribution of Leonardo da Vinci, the commercial activities from the Middle Ages to the 19th century, the faces of yesterday and today of the Ticinese district, and its musical traditions and sports.During your walk, you will feel a unique atmosphere that only the Navigli area can create, a mixture of old, new and stylish ambience. You will also visit one of the most picturesque and historical corners of Milan: Vicolo dei Lavandai (Alley of the laundress) and you will learn all the washerwomen’s tricks of the job and visit the courtyard of a typical Milanese ‘banister house’.