There is no better way to visit Utah’s national and state parks so comprehensively and comfortably. Gain access to the remote districts of Canyonlands and get unparalleled bird’s-eye views of famous spots in Dead Horse Point State Park from a vantage point that’s hard to beat.This combination tour provides an excellent opportunity for a truly memorable and awe-inspiring experience. You’ll get to see Upheaval Dome, the crater located in the Island in the Sky section of the park, White Rim, The Maze, The Land of Standing Rocks, The Needles, Dead Horse Point, Potash Salt Ponds, the Thelma and Louise Famous Cliff, Klondike Bluffs and more! 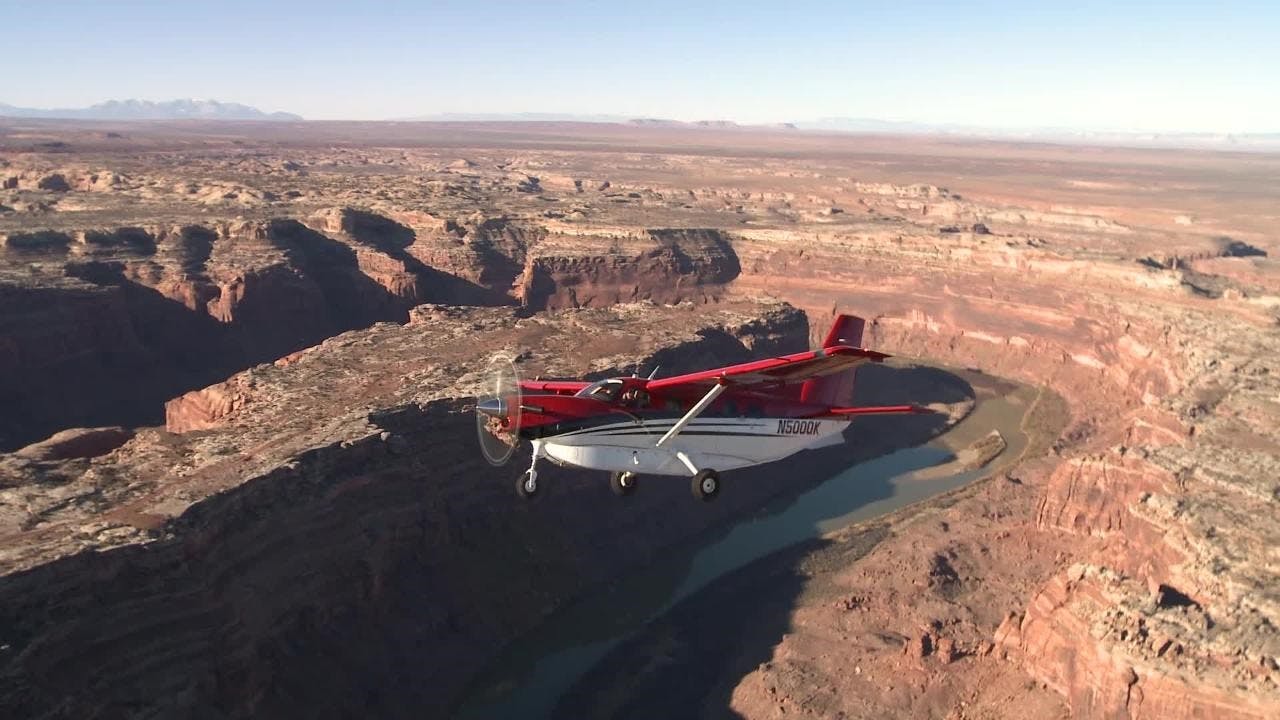 Enjoy a spectacular Canyonlands airplane scenic tour that will carry you above the fantastic scenery of all three districts of Canyonlands National Park: Upheaval Dome where mighty Colorado meets the Green River; Needles District of colorful spiral rock formations; and legendary Arches District tucked away in the backcountry.Admire majestic 1000-foot high cliffs above the Colorado and Green Rivers, and the serpentine drainage systems carved into the terrain below the cliffs. Upheaval Dome can be seen at its northern end; the Confluence of the two rivers forms the district’s southernmost point. Then on to the Needles District, the most fanciful and colorful portion of Canyonlands. Pink and white bands can be seen in its many spires and cliffs, and it is the home of some of the most remote and famous arches of canyon country. Difficult to reach by hiking and extremely beautiful, Angel Arch and Druid Arches are the best known. Elephant Arch, Kirk Arch, Wedding Ring Arch, and Castle Arch, hidden away in the backcountry, are also included. On this flight, you will admire the wondrous features of this national park with a bird’s-eye view in the vastness of this remarkable portion of our earth. Superbly colored and varied, views of these features are breathtaking from the ground, but even more amazing to behold from the air! Discover the stunning formations and harsh beauty of Utah’s desert with this self-guided Arches National Park tour. This is a self-guided tour, so no guide will accompany you. The Action Tour Guide app functions as a guide, an audio tour, and a map all in one.Learn about iconic formations like Balanced Rock and the Three Penguins as you drive past, visit famous arches like Delicate Arch, and hike the trails that showcase what makes Arches National Park so special!This tour has been developed by local guides, curated by creative writers, and narrated by professional voice artists.

Soar high in the sky on this scenic airplane ride over Capitol Reef National Park and beautiful Bryce Canyon and take in spectacular views of two of Utah’s Mighty 5 National Parks. Admire colorful canyons and bridges from high above and get unbeatable views of the spectacular cliffs of Grand Staircase Escalante National Monument.Capitol Reef National Park is a hidden treasure in the Waterpocket Fold, a 65 million-year-old geologic Framonocline (a wrinkle on the earth) extending almost 100 miles long and six miles wide. Bryce Canyon is a vast showcase of colorful rock pinnacles and spires, known as “hoodoos,” which rise from a series of natural amphitheaters stretching across the Paunsaugunt Plateau. Many formations have extravagant names according to what they supposedly look like, including “The Poodle,” “Queen Victoria,” and perhaps the park’s most notable hoodoo, “Thor’s Hammer.” These hoodoos, combined with surrounding spruce, pine, and fir forests, make for a truly picturesque atmosphere.The Grand Staircase Escalante National Monument is a series of plateaus that descend from Bryce Canyon south toward the Grand Canyon, marked by vertical drops at the Pink Cliffs, Grey Cliffs, White Cliffs, Vermillion Cliffs, and Chocolate Cliffs. This area boasts a mixture of colorful sandstone cliffs soaring above narrow slot canyons, prehistoric village sites and abandoned old Western movie sets, among many other treasures.

Gain exclusive access to see the Canyonlands and Arches National Parks from above. Bring your camera and be ready to take some amazing photographs on your airplane scenic flight!Canyonlands and Arches are two big reasons that Moab, Utah has become an international destination. Make the most of your valuable time here by visiting both parks on this special airplane scenic tour, seeing their great attractions in a way that very few have. Their vast geologic diversity, which attracts scientists from around the world, can best be appreciated from a bird’s eye view. Get a more thorough overview of eons of geologic history on this flight than one might obtain in years of hiking. Capture the moments with stunning aerial photography, and experience Moab in a way that you will never forget.There is no other way to visit Utah’s national parks so comprehensively and comfortably. Gain access to the remote, restricted districts of Canyonlands and bypass the lines and crowds in Arches. 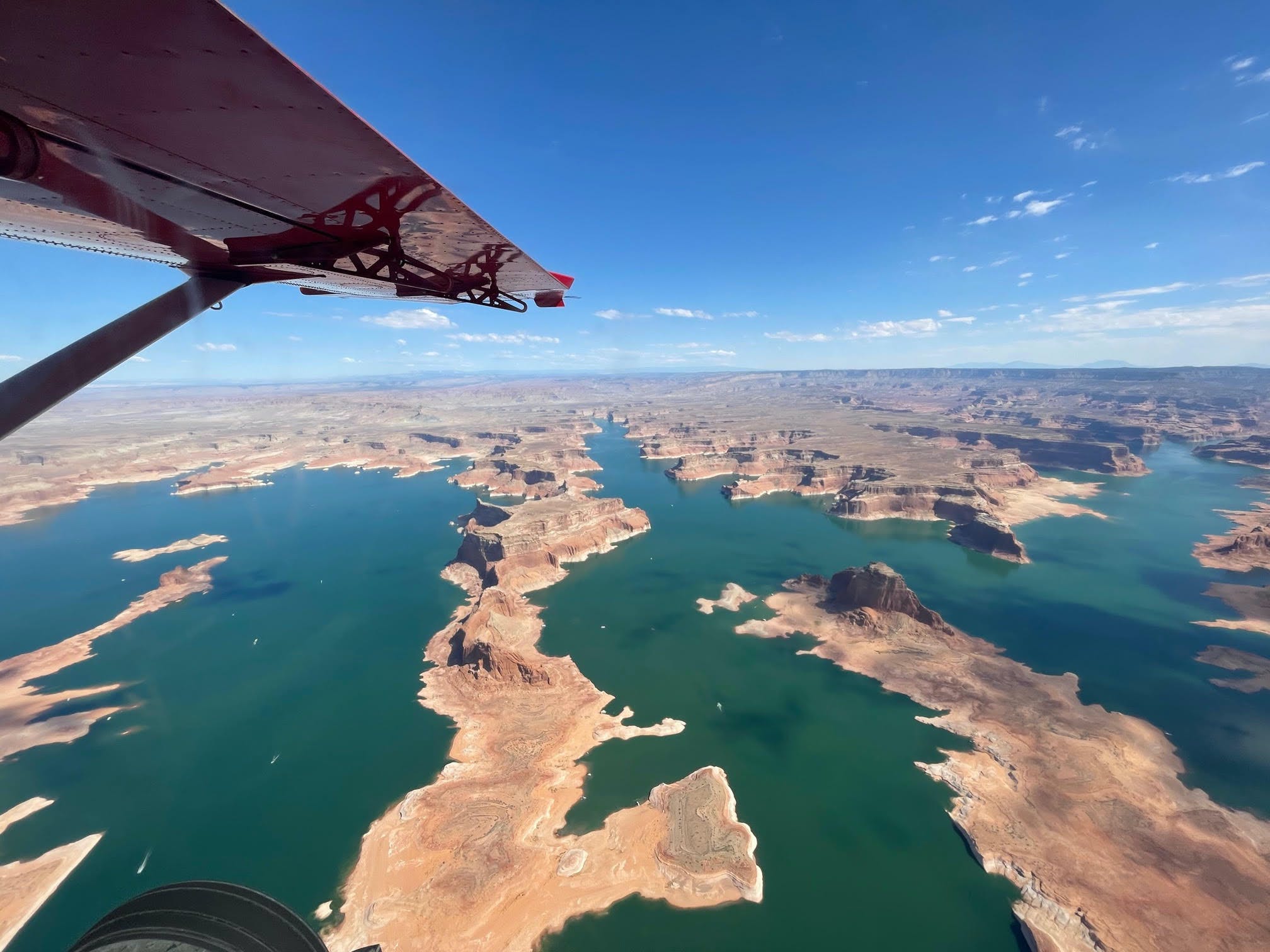