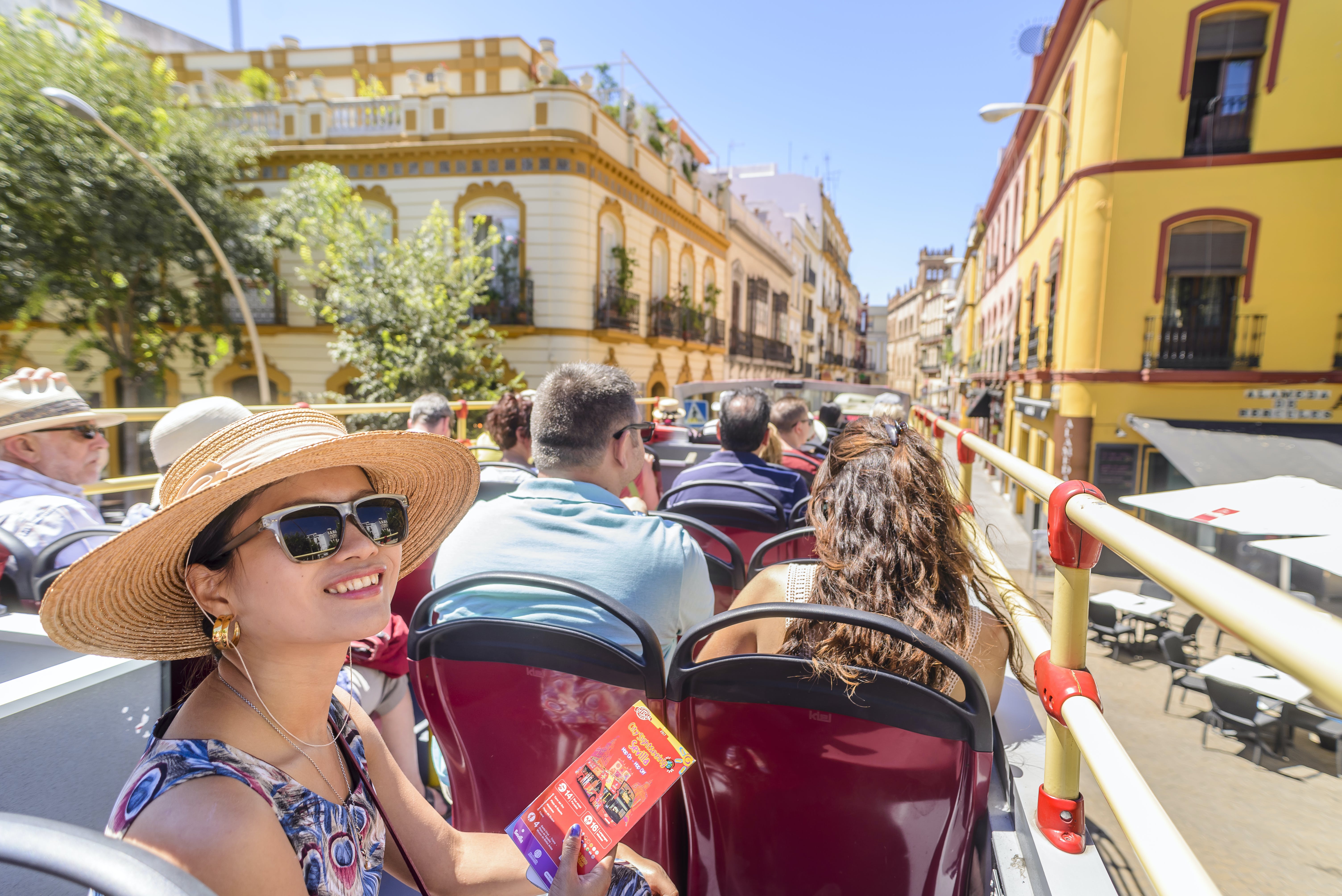 Hop aboard one of the City Sightseeing red buses to see the best of Seville. With 14 bus stops around the city, you will get to see from prestigious Islamic monuments to gardens and Flamenco festivals. Sit back and enjoy the panoramic view from the open-top bus, and hop on and off at your convenience. Learn more about the city with the audio guide available onboard and explore the city with the amazing walking tours included: Plaza de España and Maria Luisa Park, the Santa Cruz Quarter and in the Footsteps of Magellan.The 24 and 48h tickets include 3 walking tours and free entry to select attractions! Red Route:1. Paseo de Colón2. Plaza de España3. Acuario de Sevilla4. Plaza de América5. Plaza de Cuba6. Triana: San Jacinto7. Triana: Calle Castilla8. Exposición Universal (Expo ’92)9. Isla Mágica10. Macarena11. Torre de los Perdigones12. Alameda de Hércules13. Plaza del Duque14. Plaza de Armas 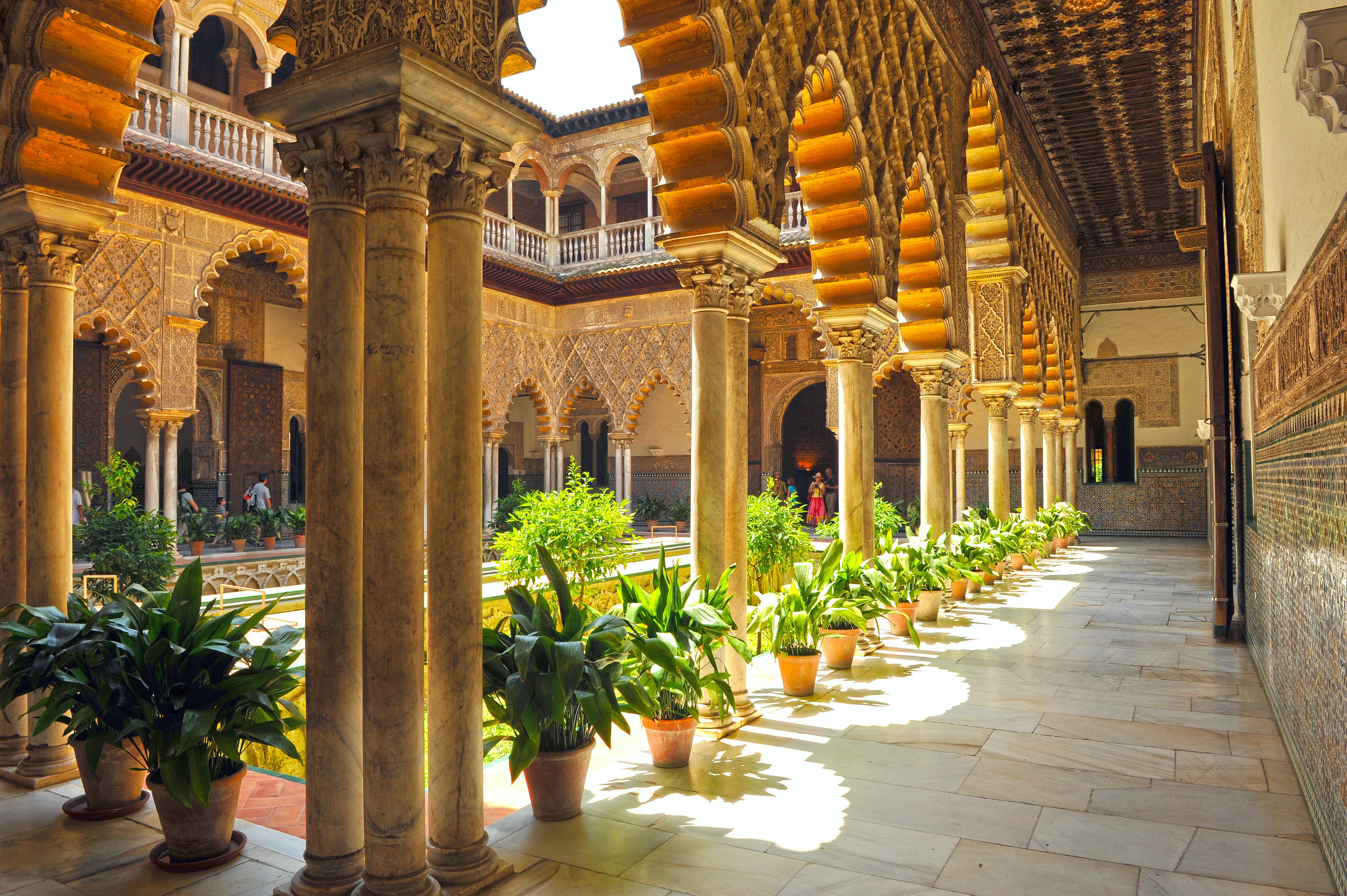 Enjoy a guided tour of the Royal Alcázar of Seville and avoid the long lines at the entrance.This incredible royal palace is one of the most visited monuments in Spain, thanks to the incredible architecture and decorations that adorn its interiors. The long history of the Alcázar is reflected in the walls, columns and decorations, displaying a synthesis of Islamic, Renaissance and Baroque art, making this palace a one of a kind monument. Thanks to the help of the tour guide you’ll learn all the secrets of the Alcázar; an experience that you’ll never forget.The Alcázar is one of the most outstanding examples of mudéjar architecture found on the Iberian Peninsula and is the oldest royal palaces in Europe that’s still in use today, being the official residence of the Spanish Royal family whenever they come to Seville. It was registered in 1987 by UNESCO as a World Heritage Site, along with the Cathedral of Seville and the General Archive of the Indies.

Skip-the-line tickets and guided tour of the Real Alcázar of Seville boeken? 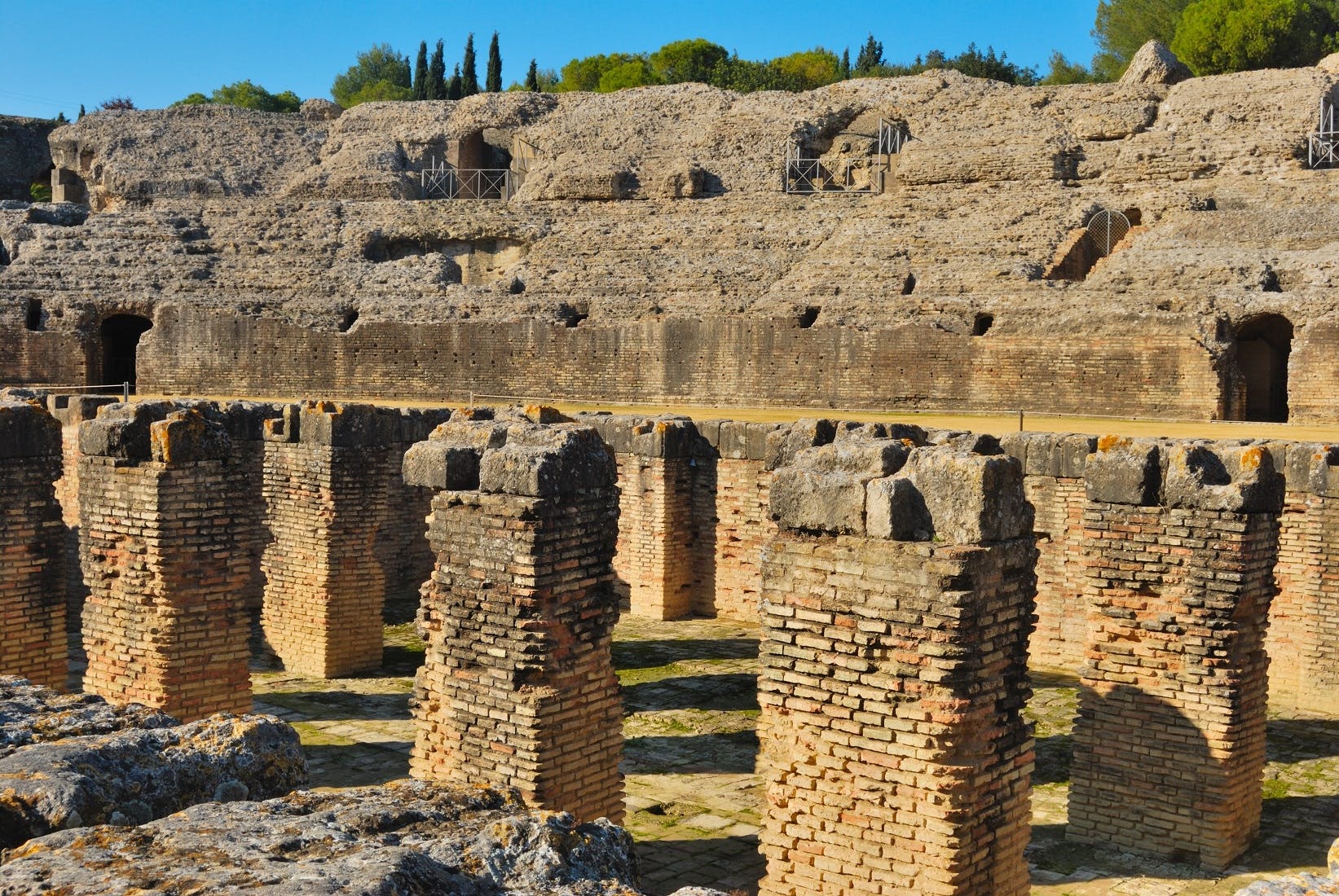 Discover Italica; the first authentically Roman city in Spain located just 15 minutes away from Sevilla. It was founded in 206 BC by the Roman general Publius Cornelius Scipio Africanus and was the birthplace of two Roman emperors, Trajan and Hadrian.
Currently called Archaeological Ensemble of Italica, visitors today can enjoy walking the old streets and exploring the ruins of the houses and public buildings. One spectacle which must be seen is the amphitheater. It had a capacity for 25,000 people and was the third largest in the Roman Empire. Other important sights include the mosaic floors, the Traianeum, the statues of Diana, Venus and Trajan, the public baths and the partly reconstructed Roman theatre in Santiponce. Thanks to the fact that none of the following civilizations settled over the ruins of Italica it is quite a well-preserved city and well worth a visit.
After this unforgettable experience, you will go on a panoramic tour of the city of Seville by bus, where you can see the more emblematic monuments of the city: Puente Triana, Calle Betis, Plaza de Toros and Torre del Oro before dropping you off at your hotel. 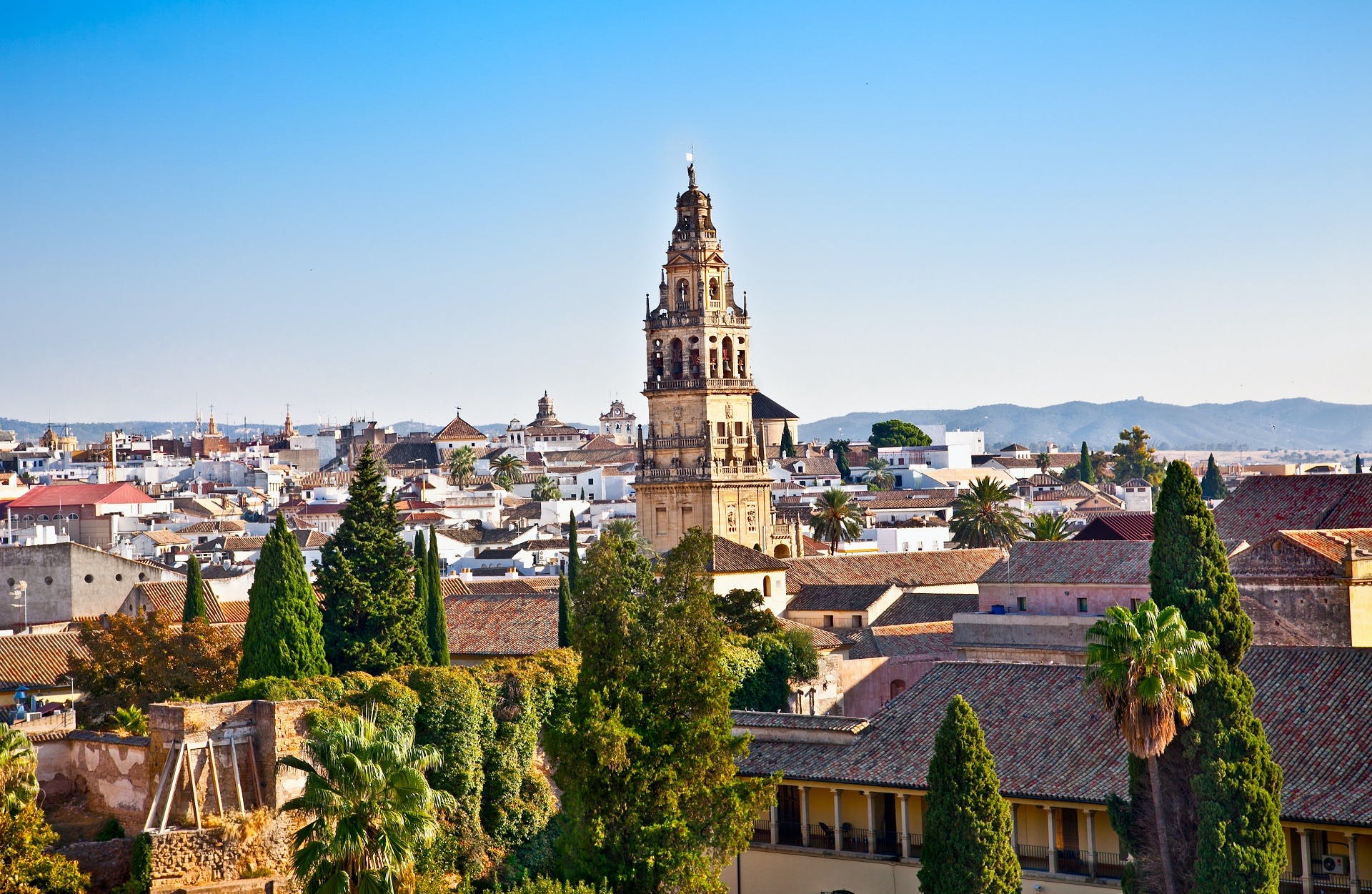 The tour begins with a scenic 1-hour bus journey to Córdoba passing through many beautiful cities such as Carmona, La Luisiana and La Carlota. You will then arrive at the city which was once one of the most important cities of the Islamic Caliphate of Spain.Córdoba offers an enormous cultural and historic legacy. You will visit the gorgeous Mosque-Cathedral declared World Heritage Site, which is considered the most important monument of the Islamic western world. Its shimmering golden mosaics and an endless row of red and white striped arches make it a visual delight.After that, get ready to discover some incredible landmarks of the city, such as the Alcázar de los Reyes Cristianos (Christian Kings Alcázar), the Jewish Quarter with its narrow streets and whitewashed houses full of flowers, and the amazing Synagogue; one of the most important monuments of Córdoba. You will also walk along the lovely ‘Calle de las Flores’, one of the most traditional places in the city.During the day you will also have some free time to walk around by yourself, have a traditional lunch or do some shopping. Discover the wonderful history of Seville with the help of an official guide. Explore the Alcázar Royal Palace – the oldest and still in use palace in Europe! In fact, the Spanish Royal family stays here when visiting the city. You will discover that Abd Al-Rahman III ordered to build it and that has served as home to monarchs for centuries until present date. This is one of the most monumental compounds in the city and Spain as a whole. Its declaration as a World Heritage made it really special and became of the most visited in the world! The complex is made up of few features: Mudéjar plasterwork for which the palace stands out. It is located in Santa Cruz Jewish Quarter, next to the Seville Cathedral and the Archivo de Indias, right in the old quarter. It has got beautiful gardens that should be seen with with almost 200 botanical species. Below you can find the Patio del Crucero, Baños de Doña María de Padilla and the underground cisterns that collect rainwater. 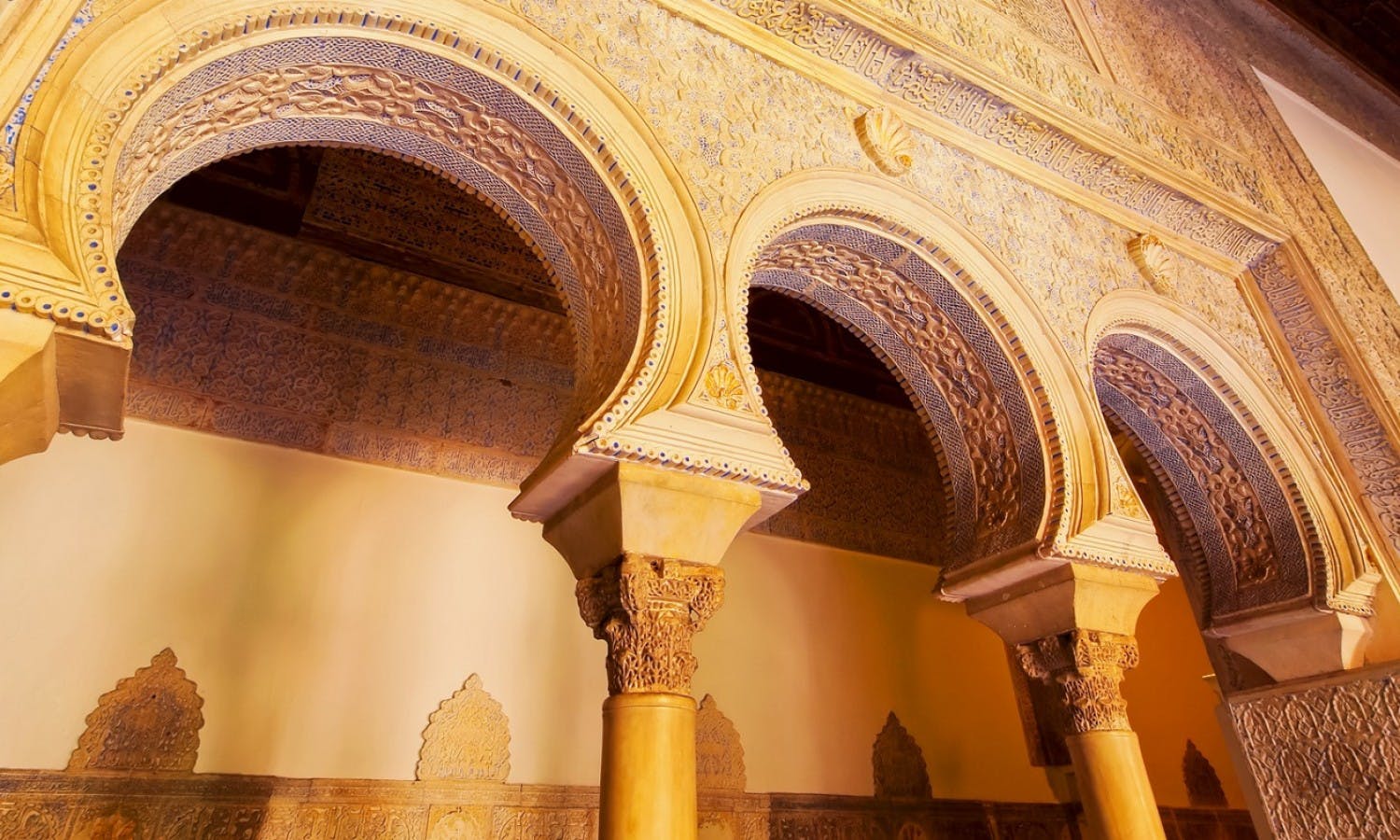 Discover two of the most charming places of Seville and learn the legends of its main monuments. You will visit the city hall and head to the Triumph Square, where you will find the cathedral with the Giralda Tower, the Royal Alcázar and the General Archive of the Indies, three buildings declared World Heritage Sites by UNESCO.The Alcázar of Seville is one of the most representative monumental compounds in the city, the country and the Mediterranean culture as a whole. The declaration of the place as a World Heritage Site by UNESCO in 1987 acknowledged the survival of cultures and civilizations as a harmonic whole.Seville Cathedral is the largest Gothic cathedral and the third-largest church in the world. It was registered in 1987 by UNESCO as a World Heritage Site. This cathedral is home to the largest and richest altarpiece in the world. To the left of the Capilla Real is the entrance to the wonderful Moorish minaret, La Giralda, which now functions as the cathedral’s belltower. It is well worth climbing to the top. Explore Seville and visit the most important landmarks of the Andalusian city with this tour: you’ll have the opportunity to visit the Royal Alcázar and the Seville Cathedral, as well as discover the famous Santa Cruz Jewish Quarter, in which the two monuments are located.During this over 3-hour tour, a professional guide will tell you all the facts you need to know about these incredible monuments, with details regarding their history and their art.The Alcázar of Seville is the oldest palace of Europe and is still in use by the Spanish royals today. Its architecture shows the various Islamic, Baroque and Renaissance influences that forged the palace, making it a true art masterpiece and a not to be missed landmark of Seville.The cathedral is the third-largest in the world and the largest Gothic cathedral in the world. Built over the old mosque of Seville, it is the perfect synthesis of all the artistic movements that characterize the city. In the same area you can also find the Giralda Bell Tower, the old minaret of the mosque. 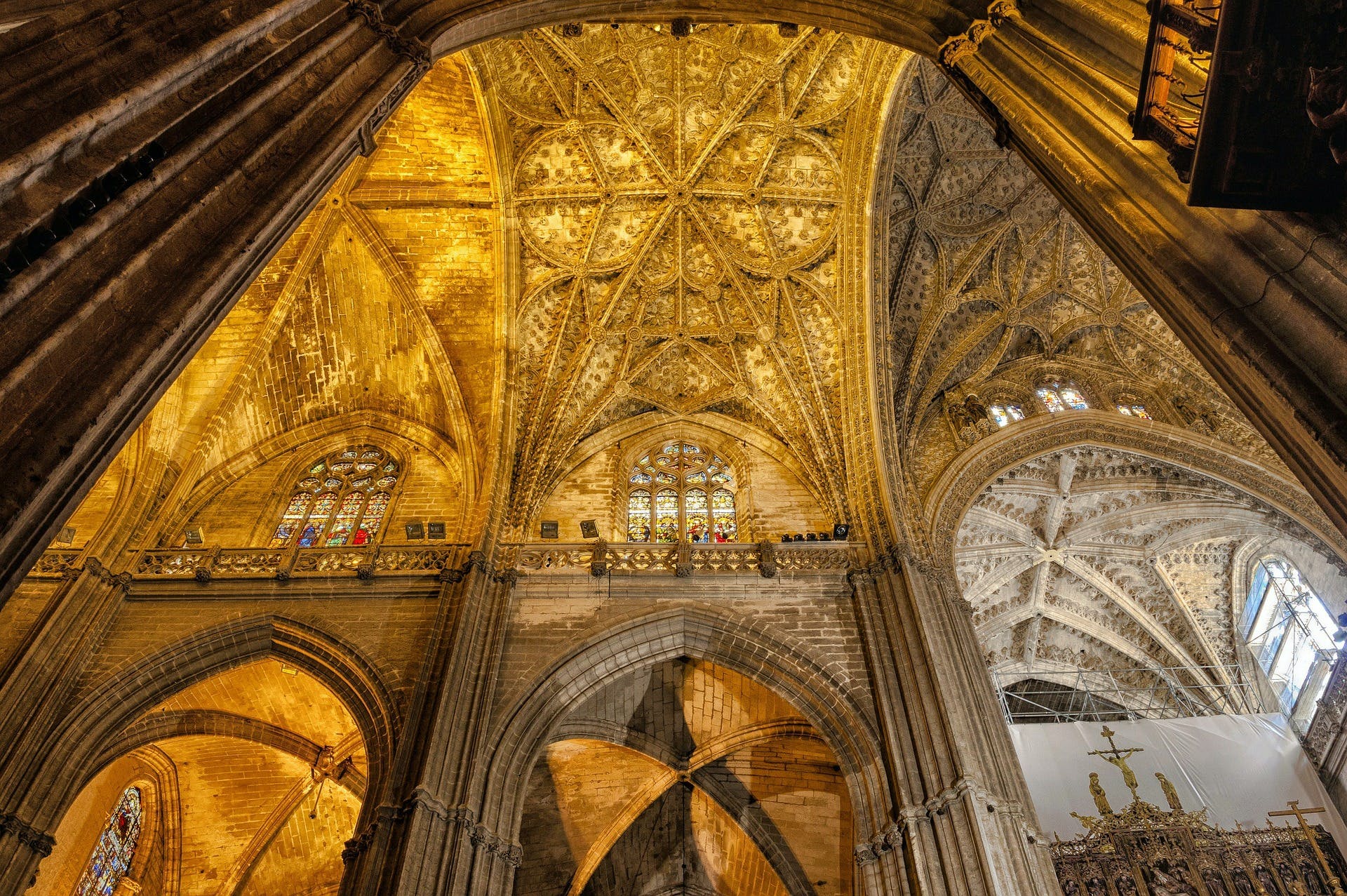 On this 2.5-hour private tour, you’ll have the chance to visit some of the most interesting and beautiful attractions that Seville has to offer. You’ll start with a tour of one of the most popular areas of the city: the picturesque Barrio de Santa Cruz. Follow your guide through the old Jewish quarter and spot the particular examples of the contemporary architecture, such as the Metropol Parasol at the Encarnación Square. Ask your dedicated guide about the legends of the barrio and the stories inherited through oral traditions only.After this walk, you’ll enjoy a skip-the-line visit inside the largest Gothic cathedral in the world! You’ll also have the chance to climb up the 35 ramps of Seville’s Giralda Tower. Marvel at the magic of the 81 stained glass windows. Admire the works of art by masters such as Alejo Fernández, Pedro Roelas, Murillo, Velázquez, Zurbarán, Valdés Leal and Goya.You won’t be surprised knowing that the Cathedral was declared a World Heritage Site by UNESCO in 1987 for its historical, artistic and religious interest. Book this 2.5-hour private tour to get the most out of your time in Seville. You’ll start with a tour of one of the most popular areas of the city: the picturesque Barrio de Santa Cruz. Follow your guide through the old Jewish quarter and spot the particular examples of the contemporary architecture, such as the Metropol Parasol at the Encarnación Square. Ask your dedicated guide about the legends of the barrio and the stories inherited through oral traditions only.After the walk, you’ll skip the queue to enter the Royal Alcázar of Seville, one of the most representative monumental compounds in the city, the country and the Mediterranean culture as a whole. Explore this outstanding examples of Mudéjar architecture on the Iberian Peninsula. You’ll get the chance to experience the palace and gardens with all your senses: the sound of the impressive fountains, the fragrance of the thousands of flowers and plants, the intricate Mudéjar plasterwork and beams in the Patio del León. 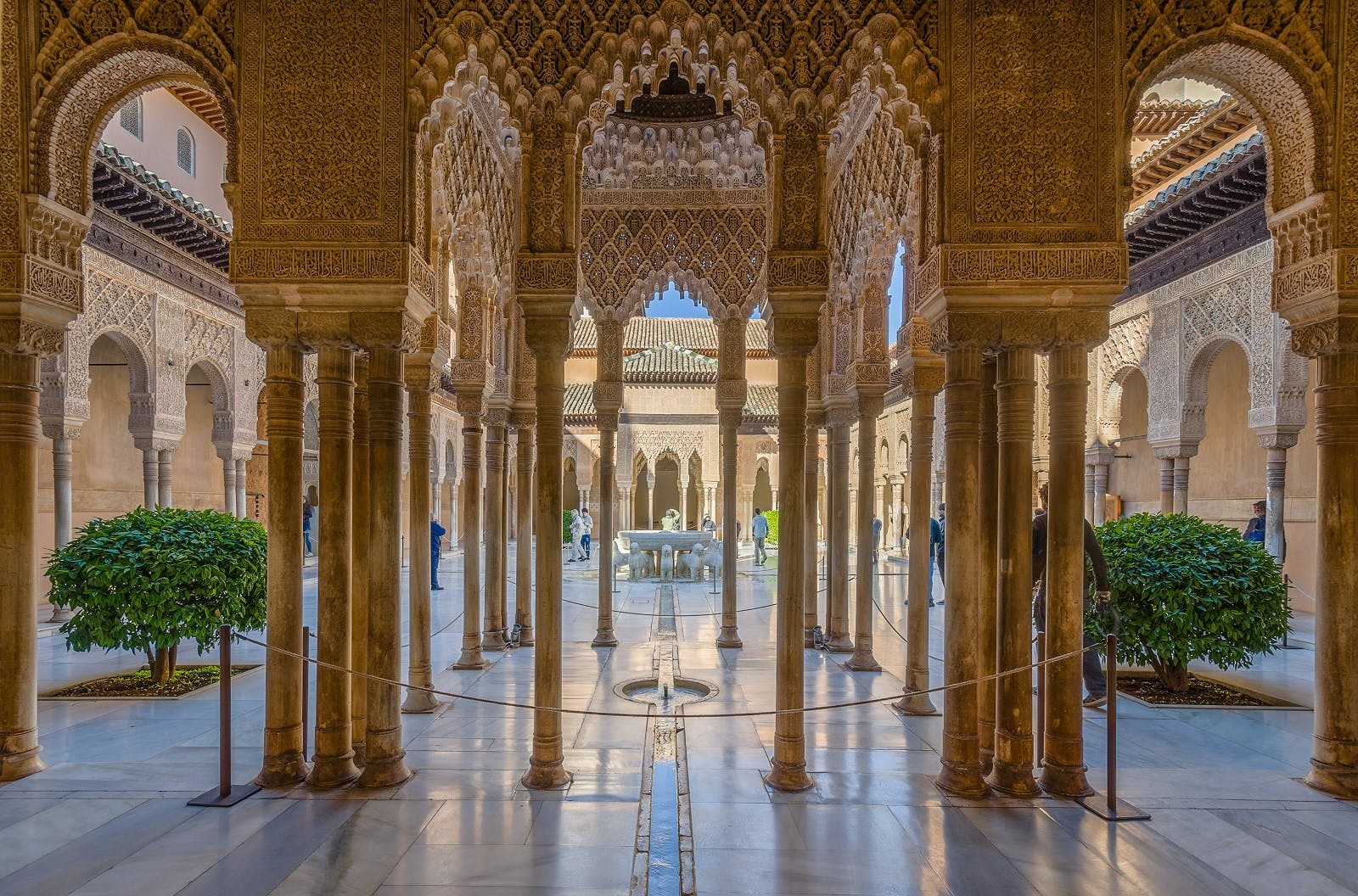 Granada is known for its historical monuments and neighborhoods, for its proximity to the Sierra Nevada ski resort, its cuisine and culture of the tapa. You will discovery all the aspects of this city during this unforgettable daytrip.The first stop of the daytrip will be the Alhambra, an old Andalusian fortress, formed of palaces and gardens, that served as accommodation for the monarch and the court during the Nasrid Kingdom. The Alhambra is listed as one of the most beautiful places in the world and is the most visited monument in Spain. Its huge gardens and its different rooms reflect the legacy of the different religions and cultures that passed through the city. You will discover every corner of this magnificent place full of a thousand stories and singularities during a four-hour guided tour inside the monument.At the end of the guided tour, and if the access time to the Alhambra allows us, you will have the opportunity to take a short walk through the city center and see monuments, streets, and highlights of this historical section of the city. After this walk, you will have time to enjoy some free time to have lunch in one of the typical bars of the city and make some purchases if you wish.At the end of the day you will meet again with the transport to return to Seville, where you will arrive at approximately 20:00 h.

Granada and the Alhambra day trip from Seville boeken?